A good education is the foundation for a better future 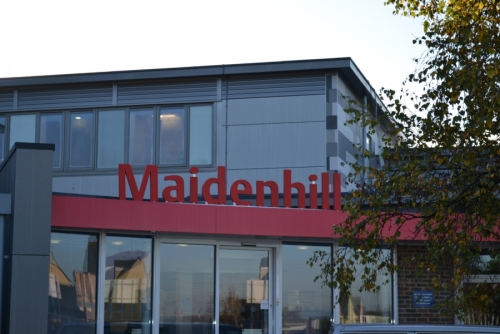 When Maidenhill School opened in 1957, it was described as a ‘Palace of Education’.  Until then, students in the area had attended Stonehouse County Secondary School near Quietways.

By 2012, it had become clear that there was a need for refurbishment of the outdated main building which formed a stark contrast with the modern sports hall completed in 2011.  In February 2014, after 18 months of building work, Maidenhill School's £3.8 million refurbishment was finally complete. The result was a transformation both inside and out.

The old 1950s classrooms were revamped with an impressive Learning Hub at the heart of the school.  Attractive spaces for students to socialise were set up throughout the building and similarly devised outside.  There is much use for the newly created conference room and four additional meeting rooms. The sport and fitness centre, which also houses drama and dance studios, is a natural extention of the sleek main building, forming a cohesive setting for learning and overall well-being.

In March 2014, following completion of the project, 500 students were given the opportunity to show their parents and carers around.  Local businesses were invited for tours and a very successful open evening was held for the wider community, including former pupils.