On 21st September, Mrs Snelgrove’s tutor group organised a non uniform day where everyone wore jeans to school to support the charity Jeans for Genes. Jeans for Genes raises money to transform the lives of people affected by a life altering genetic disorder. We raised nearly £300, which will help provide day-to-day support, nursing, equipment, patient support services, and events that will help bring children affected by a genetic disorder and their families together. 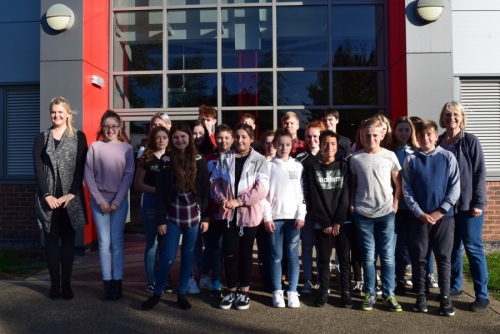 On 26th September, European Day of Languages was marked with competitions and challenges.

Mrs Collins organised a European baking competition and the cakes were sold in aid of UNICEF. I entered the baking competition because I wanted to take part in something which is fun, helps others and also helps satisfy hungry students and teachers! I enjoy baking so I wanted to challenge myself by baking a different recipe and use different skills. I researched European recipes and found a cake called ‘Piernik’ which is a Polish gingerbread with a dark chocolate glaze. I had never made a glaze before so I took it as an opportunity to challenge myself and was pleased with the result. The other cakes looked amazing. They were all decorated with different themes and were very creative!

I won the competition for best European cake; Phoebe Fox won for most creative and Highly Commended was given to Grace Gibbons Year 11, Tia Isles Year 8 and Lily Fenton Year 7. £44 was raised for UNICEF from the sale of the cakes.

The tutor group quiz was won by FDH and the Year 7 challenge was won by Isabella Parris.

On Sunday 11th November, as part of the remembrance service in Stonehouse, Year 11 students Ruby Gaulder and Toni-Jenna Laming-Mann placed a poppy wreath. This year marks 100 years since the end of the First World War.

During the week beginning 5th November, each Learning Community took part in a remembrance assembly and our minute silence took place on 9th November.

Student Leaders and the school council took charge of selling poppies and wristbands during break time to raise money for the Royal British Legion Poppy Appeal.

During Harvest Festival and again at Christmas, a food bank collection was made for Stroud District Food Bank. Staff and students donated a large collection of tins, packets and nonperishable goods. Thank you for your support.